Like a couple of others, I decided to (re)read Wild Seed for Aarti & Co’s More Diverse Universe Blog Tour. Any regular reader of NBP knows that diverse reading is important to me, so signing up for the tour was a no-brainer. The real question was what to read. I have several SF&F books written by POC that have been on my TBR for a while (A Hundred Thousand Kingdoms, Who Fears Death, etc), but I’ve been meaning to reread Wild Seed for years so that I could continue on with the rest of the Patternmaster series which I haven’t read. Since it’s been on my TBR list for the longest, Wild Seed won.

Anyway, tl;dr for why I chose Wild Seed. Onto the book itself! 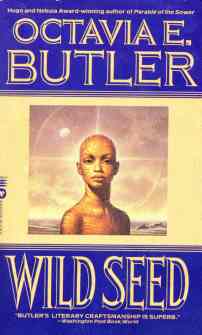 From Amazon (that link is to just Wild Seed, but I would recommend, if you are interested, in instead getting Seed to Harvest, the compilation of the four Patternmaster books): “Doro is an entity who changes bodies like clothes, killing his hosts by reflex — or design. He fears no one — until he meets Anyanwu. Anyanwu is a shapeshifter who can absorb bullets and heal with a kiss…and savage anyone who threatens those she loves. She fears no one — until she meets Doro. From African jungles to the colonies of America, Doro and Anyanwu weave together a pattern of destiny that not even immortals can imagine.”

The good: I love this book. It explores many of the same themes of other Butler novels: race, gender, sex, power. Butler also explores what it means to be truly immortal, in Doro’s case, or effectively immortal, in Anyanwu’s case. She explores the loneliness that each experience and their differing ways of dealing with it. She explores the relationship between morality and mortality. Wild Seed is about the relationship between Doro and Anyanwu, and is really a prequel to the rest of the series, so there isn’t an arcing plot. I’m fine with that, enjoy it even, but beware if you’re the type of reader who wants a big bad to fight or whatever. I should perhaps mention here that the next section will have spoilers, but given the not-so-plotful nature of the book, I don’t think it will ruin your experience. Still, don’t read the next section if you hate spoilers!

The rough: Many (most? all?) of Butler’s novels have an at least partially uncomfortable sexual and/or romantic relationship and this is no exception. Anyanwu and Doro are very different people and, truthfully, the one thing that keeps them together is that they are the only two immortal people they know of in the world. Doro’s lack of empathy, his obsession with his breeding program, and his ultimate power mean that he uses people, including Anyanwu, in very gross ways. I don’t blame Anyanwu for growing to hate him, and I don’t judge her for growing close to him again, in the end. If I was immortal in a world where almost everybody and everything is mortal, I don’t know that I could forever stay away from another immortal person. Anyanwu realizes this for herself and realizes that her only real choice is to either let herself die (which she can do, and which Doro cannot) or live with him. She chooses the latter and I refuse to belittle her choice. And I strongly disagree with Fangs for the Fantasy that that choice makes Anyanwu a long-suffering mammy. (I also disagree that Anyanwu and Doro’s ability to change sex, whilst still retaining their gender, and having relationships with women and men respectively is in any way excluding LGBT experiences and, in fact, is inclusive of trans* experiences. I do think Fangs for the Fantasy makes an important point about Anyanwu’s healing and what the books says about disability and the problems therein, but I do not think there is as much erasure/negativity as they are saying. I will have to think more on it. Anyway, head on over and see what they had to say!)

The bad/overall: For me, there is nothing, really, to say here. If you like book plots to have a distinct arc, you may have trouble. If you are sensitive to or triggered by race/gender/sex issues, I would recommend it only with extreme caution. Otherwise, I highly recommend it to everyone. If you haven’t read any Butler at all, you are seriously missing out! Get thee to the library/bookstore!